To say that last week was heavy is probably the biggest understatement of all time. Last week was one of the most emotional times I can remember in my adult life, I can’t even remember the last time I cried so much. When I first heard the news of the passing of my dear friend, Mike Chapman, I was deeply saddened, but I didn’t really grasp the full meaning of this for a couple more days. It wasn’t until me and Kelly arrived at Mike’s “Celebration of Life” ceremony on Friday that it fully hit me, Mike really is gone. 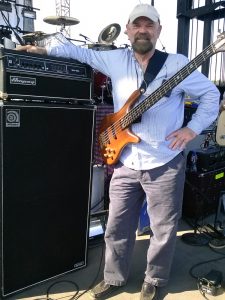 But he’s not really gone. His physical being may have left this world, but all the goodness he embodied and the huge impact that had on his family and friends remain. A part of his spirit is still here and lives within all that knew him.

I met Chap about 10 years ago, while working for country artist, Rhett Akins. We were in between bass players and our drummer at that time, Cliff Thompson said Mike would be great, if he was available. It turns out he was available, and our friendship and musical adventures began on a tour bus bound for Virginia. I had no idea on that day that he would eventually become my favorite bass player to play music with, but also one of my favorite people to be around.

Those that knew Mike knew the depths of his amazing talent on the bass guitar. Millions of people who have no idea who he is have unknowingly enjoyed his playing on countless recordings. Being a world-class studio musician and playing bass on all the Garth Brooks records (and countless others) were just one part of his amazing contributions to the world. He was also a phenomenal live musician; for he could hold down the fort like no other! My good friend, Patrick Weickenand, owner of a bar in which me and Mike performed many times, the Fillin’ Station, once said “Mike’s unreal, he never misses!”. Solid, dependable, never missing a beat – these words describe not just Mike’s bass playing, but his approach to life.

So many beautiful words were said of Mike at his celebration last week by some of his closest friends and his daughter Allison. Mike’s love for his family, friends, music, and life were as deep as the deepest ocean, his life had such meaning and purpose, and he lived it to the fullest. He was also the humblest guy you could ever meet, if he heard me (and everyone else) talking about him like this, he would have probably said something like “thanks, that’s really nice, but you don’t really have to say all that”. 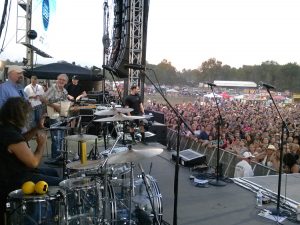 I played a lot of “big gigs” with Mike, most of the gigs with Rhett Akins and The Peach Pickers were in front of thousands of people. Some of my most memorable musical experiences were with Mike on bass backing up The Peach Pickers on the Luke Bryan Farm Tour in recent years. But hanging out with Mike on the bus, or sharing a meal or a walk, these moments were just as special.

Over the years we also played a lot of small gigs, you know the kind, 30 or 40 people in a cozy neighborhood bar (or sometimes even five or six, three of which were 2 band wives and the bartender). My wife and I were always amazed that on many occasions he would drive an hour to do these gigs with me, for nothing other 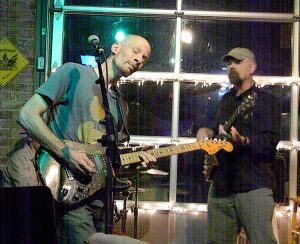 than tips and a good time. I remember him saying after one of these gigs “thanks for inviting me to the party! “, And after another “music is like ice cream!”. We really did have some magical musical moments in these little bars and I am grateful for the experiences and memories I made with him. He treated every show, no matter how big or small, with the same level of importance. He really loved to play music!

What Mike has left behind for us, aside from his musical legacy, is his legacy of love, and this was so evident at his service. One of the things I loved most about Mike was the way he would greet you with a big hug and a smile, every time! And it wasn’t just a little hug; he hugged you like he really meant it, as I believe he really did. And even if he didn’t physically hug you, he hugged you with his smile; there was so much love in his eyes. And this went on at the service, everybody was hugging everybody, it was like a great big, teary-eyed hug-athon!

In the days since that service my wife and I have talked a lot about Mike and some of the things that were said of him on that day – things like his honesty, integrity, compassion and selflessness. He never had a bad thing to say about anyone and went out of his way to help others, ideals the world can never have too much of. He generously shared his love with everyone and that might be the greatest gift anyone can give.

Over these last few days we’ve stumbled across a new mantra – “Be like Mike!”. If you’re having a bad day and life gets a little hard, hold your head up high and be like Mike. Be like Mike in all the ways that he shared his goodness in the world. Be like Mike and smile a little more, hug often, and love always. I can think of no better way to honor our friend.

Mike once said in an interview about attaining success in the music business “you’ve got to be a nice guy”. If there’s one thing I learned through my years of knowing him, being a nice guy came very naturally to Mike Chapman. I wish I could hug him one more time and play one more gig with him, but I guess that will have to wait. So if you’re listening my good friend, thanks for all the friendship, the music, and the love. And thanks for inviting us to the party! 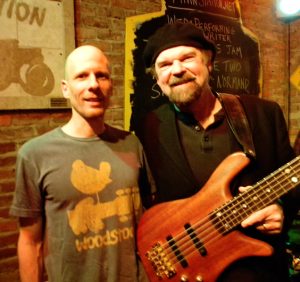