What Does It Take to Be a Good Tour Bus Driver?

It’s about 1:00 AM and were traveling east on Interstate 40 on our leased Prevost XLII tour bus, just a little bit east of Knoxville, Tennessee on our way to Manteo, North Carolina. I’m getting kind of sleepy so I say goodnight to our bus driver, Steve and the rest of the guys and crawl into my bunk. After a while I am lulled to sleep by the soft cushy ride and steady drone of the diesel 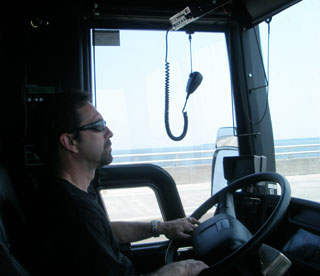 engine. Barring the occasional pothole, the sensation of this ride from the interior of my bunk is almost boat-like – more like floating down the highway. I fall into a deep sleep and awaken some hours later, unsure of whether the bus is still in motion or parked and idling, as the diesel moan is unwavering at this point. When the pitch of the engine raises slightly a few minutes later I realize we are still moving, although you would never know it because the ride is so smooth. I fall back to sleep and wake up several hours later, again unsure of whether or not the bus is still in motion. Upon walking into the front lounge I now realize that we are parked at a rest stop. I never even felt the bus stop.

A few minutes later Steve returns to the bus after topping off the tank. “Good morning Eric!” he says in a cheerful tone despite the fact that he was fairly tired from 8 plus hours of driving. I greet him with the one question he is asked the most “Are we almost there yet?” “About an hour out” he announces. With that I return to my bunk for some more sleep. After dozing off for a bit I awake, again unknowing whether or not the bus is stopped or in motion. This time when I walk to the front lounge I know we are at the hotel as Steve has checked into the hotel rooms and left the extra room keys and a note on the table. A short while later he returns and we taxi the bus 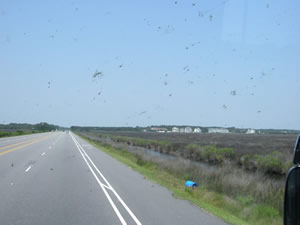 over to the venue for load-in.

“The generator has a bad voltage regulator.” he notifies me “I’ll need to get a part to fix it or we won’t be able to use it today.” I set him up with a runner and he’s off to the auto parts store. A little while later we’re loading in and he returns with the new part and begins working on the bus on this sweltering 95° day. I know he must be exhausted by now as he’s just finished a long drive and now into mechanic duties, but you’d never know it as he continually projects a positive attitude. A little while later and the ‘genie’ is fixed, he empties the trash, does a quick vacuum of the front lounge, and is finally off to the hotel for sleep. As a tour manager, it is my duty to take care of the bus driver – to make sure he has whatever he needs – be it a ride, a meal, a quiet hotel room, etc. Even though he works like a machine, he is still human and gets tired like the rest of us.

While this story doesn’t contain the apparent drama of some of the more obvious ‘hell ride’ stories regarding bus travel, perhaps what is most interesting is what doesn’t happen. We don’t get tossed around like concrete in a cement mixer. We don’t get scared to death because we hear the rumble strip more often than we don’t. We’re not made to feel uncomfortable because the driver is socially inept. We don’t have to worry about not getting a good night sleep because we will. We don’t have to worry about any of these things because our driver is a consummate professional and a great guy.

The Nashville Musician’s Survival Guide contains several chapters pertaining to bus travel – including a chapter about bus drivers, and an extensive interview with one of the best in the business, a driver we are extremely fortunate to work with, Steve P. (Steve is such a great driver, that I am omitting his last name for the time being, in fear of him being stolen by another tour) The following excerpts were taken from that interview.

Steve P has been a professional tour bus driver since 1989 and has logged hundreds of thousands of miles driving some of the biggest names in rock, pop, and country to concert destinations throughout the US and Canada. Included in this list of touring artists and bands are: Hank Williams Jr., Rascal Flatts, Faith Hill, Rod Stewart, Dave Matthews, Jeff Beck, Creed, The Other Ones, Jimmy Buffett, and many more.

A native of Bowling Green, Kentucky, Steve is retired from full-time driving, now working as an ASE certified mechanic at the Nashville based Prevost bus shop as a team leader/shift supervisor. He still enjoys driving part time, going out on weekend runs regularly.

{Eric Normand} In the world of commercial driving many drivers including those who drive semis, delivery trucks, Greyhound buses, city buses, aspire to drive entertainment coaches. Why does everyone want to drive an entertainer coach?

{Steve P} I think they all think it’s a glamorous position to be out there on the road with some top name touring act, the draw of the prestige. It’s just the simple fact of driving a very nice entertainer bus that’s polished up and shiny. It just kind of draws them in.

{EN} What is different about how you approach driving an entertainer coach compared to these other types of commercial driving?

{SP} Well I’ve never driven a truck, but to drive a bus you just have to be smooth. Even though you’re sitting in front, you have to put your head in the back, to where the passengers are riding, and every move you make effects what’s going on back there. You can’t be hard on the brakes, rough on the in and out of parking lots. You can’t make sudden and drastic moves unless absolutely necessary.

{EN} Many of these other commercial drivers that aspire to drive entertainer coaches think they are qualified simply because they drive a large, heavy vehicle. In what ways are they not prepared?

{EN} It’s no secret in the touring industry that good bus drivers are not only in demand, they are well paid. What is an average yearly income for a bus driver working on a busy tour?

{EN} What do you love about being a bus driver?

{SP} Just the travel and the experience. To go all over the United States and Canada, I don’t think I would have gotten that opportunity with any other career that I would have chosen. And, meet some interesting people on the way.

{EN} What is one of the things you like least about being a bus driver?

{SP} It sounds contradictory but, being gone all the time. Yes, I enjoyed it, but when you’re on the road for six months, it gets old, especially after doing it for years and years. When you’ve been to the same town, and the same venues, and the same hotels again and again and again, it’s kind of like Groundhog Day.

As Steve mentioned, there is much more to this job than simply driving. While safety and delivering a smooth ride is of the utmost importance, keeping the bus relatively clean, keeping the fuel and water tanks full, addressing mechanical problems, even checking into hotel rooms, are common duties for tour bus driver. And of course, getting along with the clients and contributing to an overall “good vibe” is key. More from Steve later… 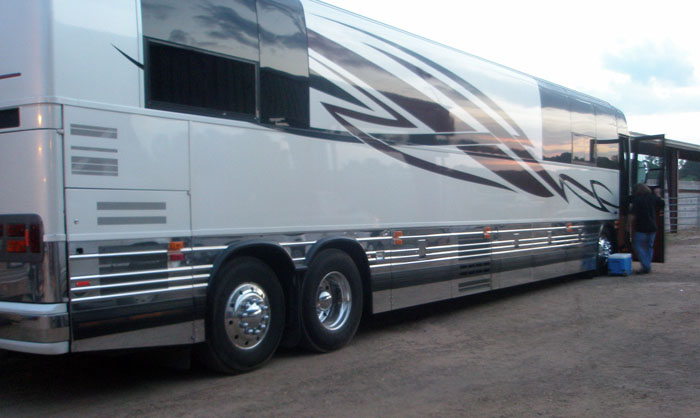 4 Responses to What Does It Take to Be a Good Tour Bus Driver?