I Found My Bus Driver on Match.com

It was almost midnight on a Friday in late September, 2006 when I pulled up to the bus near Opryland in Nashville, TN. The Longbranch saloon in Raleigh, North Carolina would be the destination for Rhett Akins and band, and this ten hour – 540 mile trip would be a one-off. The driver, Ed, was sitting in the driver’s seat when I opened the door to enter the bus, and I immediately noticed a few peculiarities. To the right of his dash-mounted GPS was a little platform upon which sat a laptop, screen open and powered on. On the floor to his right was a large igloo cooler. On his head sat an oversized telephone headset (think AT&T operators of yesteryear) which was wired to a cell phone also mounted on the dash. “Hi, I’m Ed. Pleased to meet you” he said, and with this enthusiastic introduction I thought ‘Okay, I guess I’ll have to give this guy a chance, even though he looks like he’s wired for a moon landing.’

A short while later we were loaded up and headed east on interstate 40, and I went to my bunk to go to sleep. Now anybody that’s done this ride before knows that I40 through eastern Tennessee and North Carolina is a mountainous region, full of steep inclines and hard grades. ‘The gorge’ is one particularly harrowing mountain pass in the middle of this trip that requires some careful navigating, as do a few other spots. It was in these mountain passes where I first realized that Ed was a bit less than great when I awoke in my bunk with my face pressed up against the wall. I could hear the sounds of the diesel engine moaning loudly as he dug in hard up one incline after the next. I eventually fell back asleep but not without a few restless hours of wondering if he was going to drive the bus off of a cliff, as his bouts with the rumble strip occurred at regular intervals. The sway factor was also pretty intense, almost as if he was conducting experiments in weightlessness for NASA. I found out the next day that Cliff Thompson, our drummer, has slammed his head into the bathroom wall as a result of some rough braking during the night, and that a guitar had fallen out of junk bunk. Sometime midmorning I sleepily crawled out of my bunk feeling a bit like a tossed salad.

“Did you sleep well?” Ed unknowingly exclaimed as I entered the now stationary front lounge. “Actually, I didn’t, the ride was kind of rough. I could feel quite a bit of side to side sway in my bunk.” I said in the most neutral tone I could muster. “Yeah, I noticed that a little bit too. Maybe the suspension on this bus needs to be adjusted.” “Maybe you could just drive a little bit slower on the ride home” I requested and he agreed to try. By this point of my touring life I had already been on many bus rides with many different bus drivers, some great, some terrible, and many in between. From my experiences they all think they’re great, I mean let’s face it, nobody thinks they suck. So usually by the time you figure out your driver sucks you’re well into your trip, it’s too late to do anything about it, and criticizing him or her can go either way.

By noon we were loading into the club and I was sending Ed off to his hotel room to get some sleep. “Can you put me on the guest list for tonight?” he asked “I might come back a little early and catch the last part of the show.” “Sure” I answered to this more than typical request. We went about our day, sound checking, hotels, dinner, meet and greet, etc. We hit the stage at 11:00 PM to a packed house and nothing seemed too out of the ordinary until midway through our set when I spotted our driver line dancing with some locals on the dance floor. That was the only time I noticed him in the club during our show, but immediately afterwards our merch person told me that Ed had come up to the merch table with a girl under one arm, and alcohol on his breath. A little while later I was the first tour member onto the bus and was astonished to be greeted by Ed and some unknown floozy. “Great show!” He gleefully exclaimed as they stepped off the otherwise empty bus. Is this guy for real? You would think he was the one on tour.

We loaded our gear, climbed aboard, and settled in for another frightful trip through the gorge. I wasn’t alone in my distaste for this driver, as everyone else had commented throughout the day on the rough ride and his odd behavior. Right before we set out on the voyage home I made one more attempt at coercing a smoother ride from this brainless wonder, but a short while later it was obvious that he just plain sucked. Bobby Dancy, our bass player at the time, also suspected that we were in for another 10 hour hell ride and grabbed the unopened bottle of Crown Royal from the countertop. “This is the only thing that’s going to put me to sleep tonight.” and with that he took a big swig. “I agree. With this clown at the wheel we’re going to have to change the name of the tour to Bob Weaver and the Wanderers” and with that I took a swig. We all but killed off that bottle by four or five in the morning on this would-be roller coaster ride thru hell, at which point we each began slowly retreating to our bunks, wondering if this might be the last bus trip of our lives.

Amazingly, we did eventually pull back into Nashville and the boat-like motion finally came to an end. Aside from a nasty three-day hangover, the only thing that was damaged was Cliffs forehead (from hitting the bathroom wall), and the drivers pride from the ass reaming I unleashed on him just before I drove off. I learned later from Kelly, that at one point Scott had walked to the front of the bus to discover Ed surfing on match.com on his laptop while going 75 down the highway.

I don’t remember the name of the bus company we were using at this point, it was one of several $300 a day companies that disappointed us during this time. There’s no free lunch in this world, if you try to save money with buses, you’ll still pay in the end – whether through stress, lost sleep, breakdowns, whatever. Ultimately, it was a handful of bad experiences like this one that would lead us to the decision to switch to top shelf bus companies. Because if you try to skimp out, the money you save on busses, you will spend on whiskey instead. 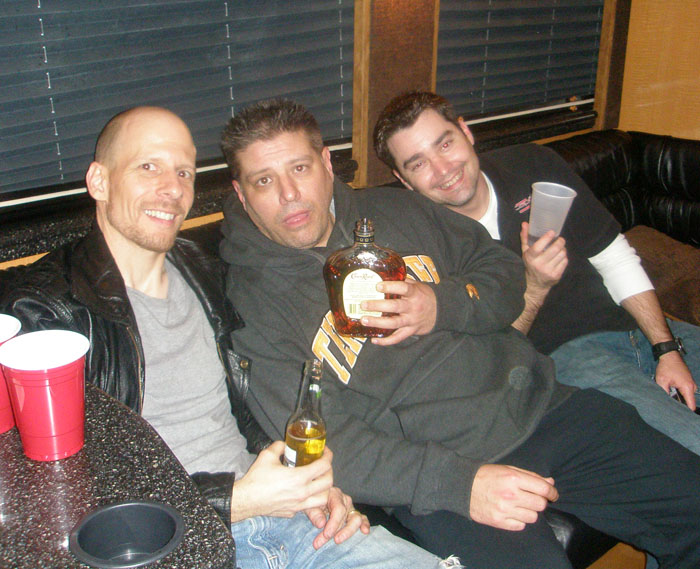 2 Responses to I Found My Bus Driver on Match.com