“We’re getting out of here before the shooting starts!” – Country Music Festival Runs Amock

Our concert last Saturday in Speedwell, Tennessee was a wash, and not because of the rain. We arrived on site to this would-be country Woodstock a little after noon, and from the moment I stepped off the bus I knew something wasn’t quite right. You could just sense and feel the tension in the air.

Everything was in place for this mega-country bash – a great lineup featuring Rhett Akins, Jimmie Van Zant, Confederate Railroad,Bush Hawg, Matt Stillwell, and several others; a great concert stage and production; vendors; campsites – yes, everything was in place, except for the people. Somehow, despite considerable advertising, there were only 100 or so folks scattered across the giant field in front of the stage on this second day of the festival.

At this point we still remained optimistic as there have been plenty of shows that started out this way and still turned out okay. But our 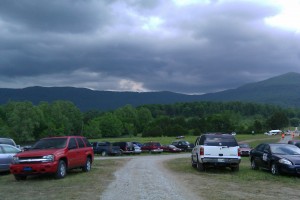 optimism would begin to fade quickly. As I began walking around looking for the promoter’s office, I started overhearing conversations that the festival was falling apart. Somebody said that the promoter was running out of money and that “the beer truck and the Porta Potty Company were pulling out.” Obviously, this wasn’t very encouraging news.

A few minutes later I found the promoter’s office and was greeted by the contact with whom I had advanced the show. When I asked him how it was going his reply was honest, but grim.

“Not good at all. The promoter is out of money and I’m not sure how this will all go down.”

“I suppose this means we won’t be able to get our bus stock?” I replied, half jokingly.

He responded, “That was one of the first red flags. When I told him I needed $300 to get bus stock for the different bands, he said he didn’t have it.”

“Ookaaay. I guess I should talk to him so we can figure out what we’re doing. ” I replied, realizing that if a three day festival was broke at noon on Saturday, and already losing their beer truck, that things could get ugly.

I walked into the next room to speak to the promoter, and saw that he was in a meeting with a couple of other event coordinators and three or four state police. Realizing this was not a good moment to approach him, I returned to the bus to tell Rhett and the gang of the situation. No sooner had I opened the bus door when a tall fellow wearing an orange “security shirt,” and sporting some really bad teeth, poked his head in and yelled into the front lounge where Rhett was sitting.

“Is that him, is that Rhett Atkins?” he yelled, incorrectly pronouncing Rhett’s last name.

The fellows reply was astonishing, “You ain’t nothin’ to me, you’re just another feather in my bird!”

Quickly ushering him out the door, I assumed he was just really stupid and socially inept, or that maybe perhaps he was a meth-head.

A few minutes later I walked back to the promoter’s office to find out about getting some food. I asked if we could get some meal tickets for catering and if we could at least get a case of water and a case of beer. I was presented with meal tickets which were good for some “ham sandwiches” and chips, and I was also presented with an interesting box of bus stock consisting of:

“Thanks, I guess somebody was already hungry.” I said, amazed that we got anything at all.

A little while later I was able to finally speak to the promoter who informed me that it was our option to play, and that he might be able to pay us “some money” but that it was unlikely he would be able to pay us our entire fee, and that this would be the case for the other bands as well. I told him I would check with the boss and get back to him.

After relaying all this to Rhett, he decided that in spite of not getting paid that we might as well play anyway, as we were already there. On the way back to the promoter’s office to relay this message some other folks who were hanging around backstage told me that they had heard the Porta Potties would be pulled out by seven o’clock, at which point the police or Board of Health would shut down the festival. When I asked one of the state troopers if he had heard anything like this, his reply was “yes, I have heard those rumors too, but I can’t confirm anything. I can tell you that we are pulling out our extraction team and that the remaining officers will be stationed on the perimeter.” I wasn’t entirely sure of this significance, but it sure didn’t sound good.

As I approached the promoter’s office, I could hear a loud argument. In front of the main entrance stood a big, tall state trooper, his arms folded in front in an intimidating power stance. As I got closer I heard several event workers demanding to see the promoter about their pay, as they had apparently heard rumors that they were going to get stiffed.

“I need to see him now!” demanded an angry worker.

“I’m sorry sir, nobody can see him right now.” the trooper stated firmly. After another minute of yelling and arguing by the crowd of 8 or so, the trooper restated his position – “Nobody is going to see him right now, I’m just doing my job and trying to make sure that nobody gets hurt or shot!”

Over my seven years of working as a road manager, this was the first time I had ever heard or seen anything quite like this, and the angry mob-like scene was enough to send me scurrying back to the bus. Along the way back to the bus a drenching rain set in, and we overheard more angry workers with comments about people getting shot. This would-be country Woodstock was beginning to look more like Altamont – only without the masses. Despite Rhett’s willingness to play for free, in light of the most recent developments, we decided it was best to head on down the road. I’ll have to check, but I’m pretty sure that getting shot is not one of the requirements in our rider. 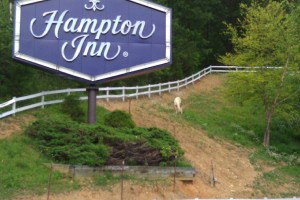 After our hasty retreat we arrived safely back to our hotel, the Hampton Inn in Carryville, TN. A little while later, Nick, our drummer, received a text from one of his friends who was playing in another band at the festival – something to the effect of “We’re getting out of here before the shooting starts!”

From what we could tell, there were no riots and nobody got shot at the festival. But still, the whole situation was quite unnerving and unfortunate. Obviously, several other bands besides us were leaving town without their pay, as were many vendors and event workers. The festival goers who were in attendance were ultimately shortchanged. And the promoter obviously lost his shirt, not to mention credibility.

On a brighter note, we did have a great time hanging out at the Hampton Inn and the guys did enjoy a fabulous dinner at the local Waffle House!

The Hampton Inn in Caryville, TN, was the most unique Hampton Inn we have ever visited – the walls of the lobby, hallways, and stairwells  covered with hundreds of old photographs, newspaper clippings, and folk art and providing a retrospective of the old South. It even had an adjacent llama farm. I’m going to try to write a blog over the next couple of days as there’s not enough space to do it justice here.