Saturday Morning at the Shack Up Inn

We woke up kind of late on Saturday morning, a light rain falling on this grey but warm September day. Although we had initially planned to check out and head to Memphis around noon, we felt like our journey here wasn’t complete and that we would be doing ourselves an injustice by not staying for one more day. Memphis would just have to wait for another time. So after a little breakfast on the screened in back porch, I walked over to the lobby to see if we could stay for one more night. I explained to Marc, the woman working at the front desk, that we were having such a great time in Clarksdale and wanted to stay for one more night. “All our shacks are booked for tonight, but give me a moment.” With that, she disappeared into a back room, returning a moment later with some good news. 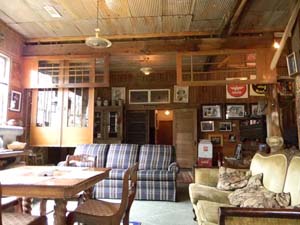 “Guy said that we can rent you a room at ‘Bill’s house’ if that can work for you.” “Sure, that sounds good.” A minute later, I was introduced to Guy who walked me over to the house to show me the set up.

As it turned out, ‘Bill’s House’ is a magnificent 3000 square foot, three bedroom ‘cabin style’ home housed in an old tin covered barnlike structure just beyond the shacks. The decor in this giant space was as rustic as our cabin, and our bedroom even had its own separate bathroom wing. I told Guy that this would work just fine, and on our walk back over to the lobby asked him if they ever have any performances in the music hall. “Yeah, we have live music sometimes. It’s actually a great sounding room.  I’m working towards being able to make live recordings in there.” He went on to tell me how when they were first building the music room, he had a friend from a university come in and conduct ‘sound tests’ to acoustically maximize the space. If all goes as planned the Shack Up Inn will have the ability to make live multitrack recordings sometime in the spring of 2011. I said goodbye to Guy and headed back to our shack to begin moving our belongings over to ‘Bill’s House’.

A Drive around Town

After lunch we decided to take another drive around to further explore the town. As we had already seen much of downtown, we set out without a plan to get a feel for some parts of the town we had not yet seen. The city of Clarksdale is an interesting community. Our casual 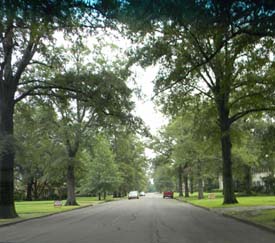 drive encountered sporadic light traffic, and took us in and out of many different neighborhoods. There were ‘nice’ sections, and not so nice sections, but even driving through the not so nice sections, we never once felt uncomfortable. We noticed some areas had relatively well maintained homes right next to rundown ‘shack like’ buildings, while other areas looked completely destitute. Economically speaking, Mississippi is 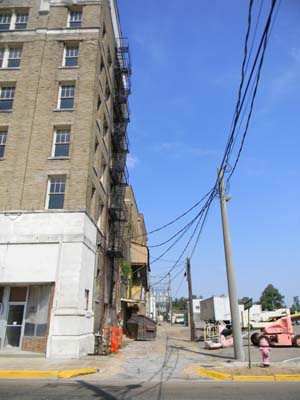 the poorest state in America, and this struggle was evident. How could a place so rich in culture and history, it’s musical heritage literally the foundation of all modern music, become so neglected and forgotten?

A little while later we were driving by Red’s on the way back to the Inn when I noticed a car parked out front. The front door was open, so I stopped in for a quick hello. During our brief chat Red asked me where I was from. “We’re from Nashville and came here to celebrate Kelly’s birthday.” “Nashville, now that’s a dangerous place!” he proclaimed, and I nodded my head in agreement. He went on to tell about some of the town’s biggest talents growing up within just a few miles of this spot. “John Lee Hooker grew up just a couple miles from here. Muddy Waters grew up about 5 miles from here. Ike Turner used to live right across that bridge.” He went on to tell about how in the old days, when a lot of these guys started becoming successful, that’s when their problems really began. “Once they started making money, they bought new houses and cars, only to lose it all once they split up with their old ladies. Sometimes, after they’d become successful, they couldn’t afford to have careers, so they’d just quit for a while.” So goes the life of a bluesman.

Saturday Dusk at the Inn 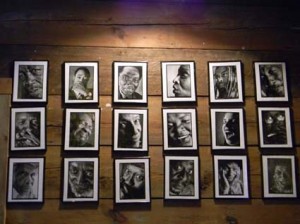 We returned to our ‘new shack’ and ate dinner, after which I decided to take one more walk around for some photos. The music room in the ‘Cotton Gin’ contains some beautiful spectacles, and I just stood there for a moment upon entering, soaking in its woody vibe. Memorabilia and signs from a forgotten era in the South’s not so distant past were constantly evident, and at times I couldn’t tell whether I was standing in a music hall or some sort of cultural exposé. The fact that blues recordings can be heard literally all over this plantation only add to the mystique. A sign bearing the words ‘Dentons Ice Cream – it’s real food’, a portrait of Elvis, a pre-1950s looking Schlitz beer sign, an old Coke machine – not a hint of anything modern except for the two PA speakers on the stage. I was beginning to feel like this entire Clarksdale experience was the junior high school field trip that I never had, but should have had. This kind of culture and history just can’t be learned in a textbook.

It was about 7:30 when we pulled up to Red’s and, unlike the night before, the place already had a bit of a crowd. We walked in toting my guitar and amp, as Red requested, set them down near the music area and found a seat. T-Model was already there, sitting on a chair next to the drums and lightly playing some bluesy guitar riffs. His 12-year-old grandson ‘Stud’ is T-models regular drummer, and was already seated behind the drums. I went to the bar to say hi to Red, bought a couple of beers and returned to the table. A few minutes later T-Models light strumming morphed into the beginning of his set, almost unnoticed. The crowd grew quiet as soon as he began singing in his deep resonant voice, his chilling cries slicing through the night air like a razor. We sat mesmerized, and the crowd showed appreciation after each song. About a half hour into his set he asked “Where’s that other gee-tar man?” I raised my hand, and he waved me to the stage with an inviting gesture.

As soon as I set up my amp and plugged in my guitar we were off and running. He never announced any song in advance, he would just start playing a rhythm, a couple of bars later Stud would follow suit, and I would jump in as soon as I could figure out what they were doing. Before I knew it, the place was a rockin’ and I was holding on for dear life. Every once in a while, in between songs, T-Model would grab a glass of whiskey from the top of his amp, hold it up, and proclaim with a passionate howl “Jack Daniels time!” evoking an excited response from 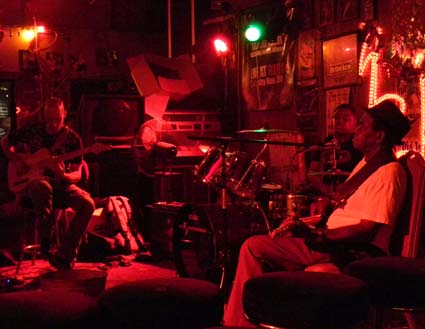 the crowd every time. Beginning to feel a little left out, I signaled Kelly to bring me a glass of whiskey, which, after taking a healthy swig from, I set on a stool beside me. Gradually, the place filled up and we just kept on playing. I recognized some of the faces from the night before, but many newcomers were there as well. When T-Model asked the crowd were they were all from, some of the answers were different than the night before, but still just as diverse – Wisconsin, Spain, Louisiana, Germany, among other distant places.

Following T-Model in his unique brand of Delta blues was as much an education as anything else. Unique to his style is a peculiar notion of changing chords on random beats, something that Stud is exceptional at following, and I was learning. This required intense concentration on my part, and I rarely took my eyes off of T. Apparently, it was all working quite well, as the audience constantly showed their approval. Several times throughout the night the dance floor again erupted with the kind of sexy and provocative moves that could only happen in a juke joint in the deep South. At some point in the middle of all this, Dingo asked if ‘Gypsy’, the blues guitarist from Japan, could use my amp for a couple of songs. He played a couple, and then T-Model motioned to me back to the stage. A local harp player then sat in for a few, the crowd still grooving hard. Around 11:30 things began to wind down, T-Model had been playing for nearly 3 1/2 hours straight and it seemed like he had said everything that needed to be said.

As I put my gear away, I couldn’t help but thinking how lucky I was to be invited to play a whole night with a living blues legend in a real juke joint. We had a few photos taken with Red and the gang, and thanked everybody for making our first trip to Clarksdale such a wonderful experience. I commented to Dingo about how great it was that they let other players sit in. “We let everybody play. If they’re good, then they can keep on playing. If they’re not too good, then we just kinda eeeeease em’ on out after a couple of songs. But everybody gets to play at Red’s.” I thanked T-Model for letting me play, and he shook my hand and said “Thank You!” Red and his friends had welcomed us into their world, and their openness warmed our souls. It was a truly magical night!

Nightcap at the Shack

Back at the Shack Up Inn a few minutes later, we grabbed a couple of beers and went out to sit on the giant porch swing behind the lobby to unwind. We chatted with several other visitors, and it seemed everybody we talked to had been at Red’s at some point over the weekend. College kids from LSU, a couple vacationing from San Francisco, even Marc, the front desk clerk had gathered with us to enjoy some late-night cheer. It wasn’t long before some acoustic guitars came out, and we all sat around for a little while longer strumming and singing into the night. I couldn’t believe that we were actually going to have to leave this place! 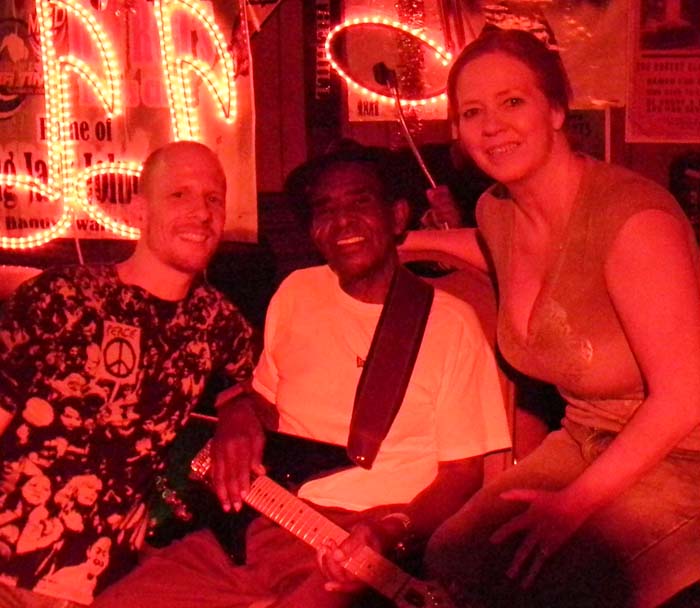