Hey everybody, I apologize for the big gap in between blogs lately. I’m up to my armpits in this book project, literally swimming in it, and it’s been hard to break away and write a weekly blog. But here it is! As many of you have been reading, some of my most recent blogs have been about my experiences working on the Toby Keith tour. Well here’s one more to cap off that series!

It was a cold, March day in 2004 when the Toby Keith tour rolled into Portland, Maine for the final two shows of the Shock ‘N Y’All Tour at the Portland

Civic Center. I thought it was a fitting finale to end this whirlwind of a touring season back in my native land of New England, kind of like coming full circle to where I began my journey into the big leagues just two short years before. Except for a couple of weeks off for the holidays, we had been running virtually nonstop since July, and many of us were ready for some real time off.

A tour on this level, or on any level for that matter, is very much like a family, everybody knows a little bit about everybody else’s business, there’s no escape. By this point of the tour, some 90 shows after I had begun my new vocation of guitar tech, I had become very proficient at my job, the only real debacle to date being Rich’s guitar rig going down for a few panicked moments a couple weeks back. Despite the fact that I was doing my job well, it was no secret to everyone else on the tour that I desired to land a gig as a player, and that my role as tech would likely be short-lived.

I have to admit, while my job was stressful at times, my specific daily tasks, while tedious, weren’t that difficult. It was the emotional quagmire of being a player stuck in a tech’s body that I found most challenging. Being gone for days or weeks on end, setting up guitars and gear all day long, watching the arena slowly fill to capacity, and then right at the peak of the night finding myself standing on the sidelines watching the game. Don’t get me wrong, it was still a thrill to be a part of. I stood on many a stage facing 20,000 or more concertgoers, with every note of the band’s 20 song set permeating my being. It was truly electrifying! But as much of a rush as this was, I wanted to be up there playing guitar, and everybody pretty much knew this. After all, not only is it fun to play music with a band for a receptive crowd, peer recognition is also one of the validations that many of us musicians seek.

So when I first caught wind about an impromptu jam that was being organized for the end of tour party after the show on this night you can only imagine my excitement. Being barely 2 years into my Nashville journey, I viewed this jam as a chance to prove to all my coworkers that I could play music as good as I could tech. Okay, maybe I needed to prove this to myself as well.

The day went pretty smoothly, like so many other show days over the past eight months, with everybody doing their thing and setting up for another sold-out show. As this venue was on my home turf, my typical routine was broken up with a couple of guided tours I provided for some family and friends. My wife, Kelly, was in town for this show, as well as my mom and dad and my good friend Russ Littlefield and his wife. Of course they were all thoroughly impressed with the massiveness and efficiency of this organization as I took them through the various workstations throughout the venue – front of house, monitor world, guitar world, dimmer beach, video world, and of course, a big stop at catering for dinner. 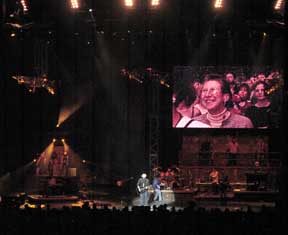 The concert went off without a hitch and my mom had a big thrill when her face appeared on the giant video wall, courtesy my friends on the video crew. A little while later the concert ended, the hall emptied, and after saying goodbye to my family and friends I rounded up a couple of crew guys to trek some band gear to the banquet room. As this was a rare two-nighter, all of the big production stayed in place, allowing this late night after party to begin at the early hour of 11 PM.

A short while later and the private banquet hall was filled with Toby Keith tour members, as well as the tours opener, Blake Shelton, and his entourage. The dinner on this night was all out – fresh Maine lobster and New York sirloin’s with an open bar as well, and Kelly and I enjoyed our share. Somewhere near the beginning of this night within a night, Toby made a brief speech, personally thanking everybody for helping make this particular tour one of the highest grossing country tours to date, somewhere in the neighborhood of $43 million. To show this appreciation, he announced that everyone would be receiving a special personalized plaque, and pointed to a table off to the side at which we could all acquire these special momentos. 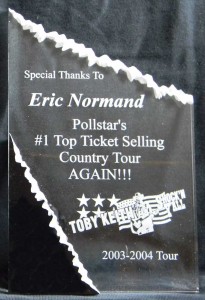 After dinner ended people began circulating around the room and the alcohol began to take effect, quickly kicking things up a notch. It didn’t take long for the music to begin and somehow, I was included in the one of the first rounds of this no holds barred jam-a-thon. To the best of my recollection this grouping consisted of Toby, his drummer, Dave MacAfee; Blake’s bass player; and me on electric guitar. We played with this group and for a half-hour or so, rendering a few rocking versions of barroom standards like “Keep Your Hands to Yourself”, “Old-Time Rock ‘n Roll”, and the Doobie Brothers classic “Long Train Running” in which I unleashed a feverish solo during the ending vamp. I must have played quite well, for after this last number, Toby, who hadn’t said anything more to me than the occasional “Hey brother” for the past eight months, turned to me and said “you just smoked both of my guitar players!”

Of course this comment landed me on cloud nine, and I’m sure Toby meant no disrespect towards his longtime guitar players, Rich and Joey, both whom are fine musicians. It was just one of those rare moments in life I had been waiting for, kind of a secret audition in my own mind, with Toby reacting genuinely to my over-the-top moment of guitar antics. Of course this short-lived “tech elevated to player” status yielded some great applause from my fellow crew members. All the other band members already knew I could play, but most of the crew guys had only heard me play some fragmented licks during the soundchecks. Judging by their comments afterwards and the next day they were genuinely excited to see one of their own crewmates ‘kick out the jams’, perhaps a few of them living vicariously through me in that unique moment.

After our set, I handed the guitar off to Joey, and Blake got up as well. Over the next couple of hours, everybody who wanted to play got to play. The party was still raging at 3 AM with a couple of tour members passed out in their seats by this point. Sometime around 4 AM it finally started to dwindle, and we headed over to the hotel room to sleep (one of the only times I didn’t sleep on a bus for the entire tour). 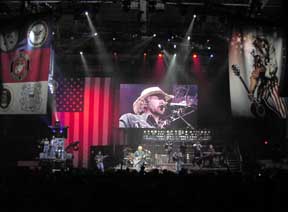 The next day we were all back to work getting ready for the final show, and many of the crew and band members were nursing significant hangovers. When Toby arrived for a brief sound check he again commented on my guitar playing with “you rocked last night!” I thanked him for the complement and we went about our day. Later that night our second show in Portland also went off without a hitch, and I said goodbye to everybody afterwards, as I was staying behind to visit family and friends.

At that moment I assumed I would be continuing this gig when it started its next leg of touring that summer. But as fate would have it, another opportunity would soon present itself and the Toby Keith tour would be my one and only foray into the world of the guitar tech. I will be forever grateful for having that opportunity, for it yielded much knowledge, great memories, and many friendships. But my wish was about to come true and it wouldn’t be long before I would be standing up there on stages throughout the land, doing what I had set out to do, playing the guitar.

That said, I will never forget that special night in Portland! 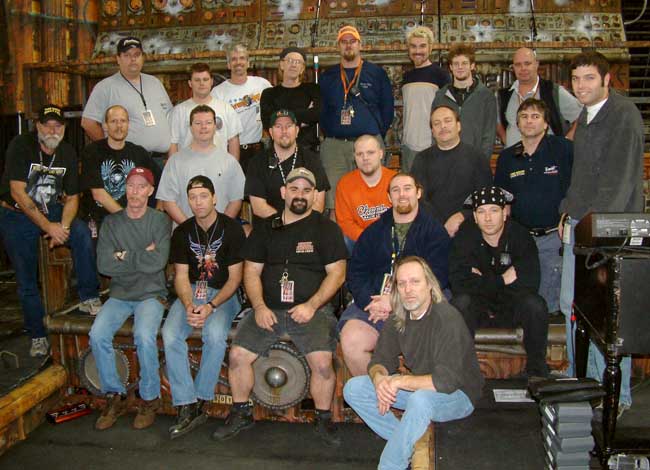